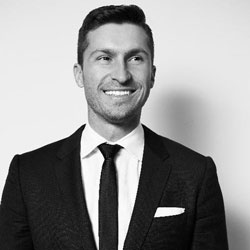 Healey Cypher was a featured speaker at RetailSpaces ’15.

Healey Cypher is the Founder/CEO of OAK. His passion is to elegantly infuse technology into retail experiences. In 2012 he founded and led the Retail Innovation group for eBay, Inc. His team launched the Rebecca Minkoff Connected Stores, Kate Spade Saturday WindowShops, and projects with Nordstrom, TOMS, Sony, Westfield, and the Simon Property Group.

Healey is recognized as a leader in the retail space, hosting the Next Generation of Retail Stores session at SXSW Interactive in 2014 and 2015, and regularly speaking at NRF & Shop.org. He has been interviewed by top-tier media including CNN, Fast Company, the New York Times, Forbes, TechCrunch, The Wall Street Journal, and CBS. At age 29 he was selected as “40 under 40” by the Silicon Valley Business Journal, and at age 30 was awarded “40 under 40” by design:retail magazine. He got the Forbes 30 under 30, but when they realized he was actually 30 they rescinded it. He’s pretty sore about that. What a brat.

Prior to his tenure at eBay and Milo, Healey worked as a consultant in New York City. He is an alumnus of the Wharton School at the University of Pennsylvania and from Nebraska, but spent the majority of his early life in Riyadh, Saudi Arabia. #raaandom