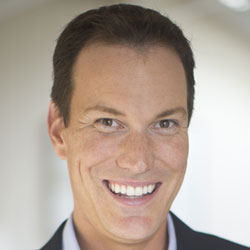 Shawn Achor was a featured speaker at RetailSpaces’ 18. Read a summary of his session here.

(Achor is pronounced A‐kor, like a core of an apple)

Shawn Achor is the bestselling author of The Happiness Advantage and Big Potential. He spent 12 years at Harvard, where he won over a dozen distinguished teaching awards, and delivered lectures on positive psychology in the most popular class at Harvard. Shawn graduated magna cum laude from Harvard and earned a Masters from Harvard Divinity School in Christian and Buddhist ethics. Shawn has since become one of the world’s leading experts on the connection between happiness and success. Shawn has now worked with over a third of the Fortune 100 companies, and with places like the NFL, the Pentagon and the U.S. Treasury. To do his work, Shawn has traveled to 51 countries, speaking to farmers in Zimbabwe, CEOs in China, doctors in Dubai and schoolchildren in South Africa. In 2014, Oprah Winfrey did a two hour interview with Shawn on the science of happiness and meaning. His research on happiness made the cover of Harvard Business Review, his TED talk is one of the most popular of all time with over 18 million views, and his lecture airing on PBS has been seen by millions.